What is the Federal Housing Administration?

The Federal Housing Administration, generally known as "FHA", provides mortgage insurance on loans made by FHA-approved lenders throughout the United States and its territories. FHA insures mortgages on single family homes, multifamily properties, residential care facilities, and hospitals. It is one of the largest insurers of mortgages in the world, insuring more than 46 million mortgages since its inception in 1934.

What is FHA Mortgage Insurance?

FHA mortgage insurance provides lenders with protection against losses if a property owner defaults on their mortgage. The lenders bear less risk because FHA will pay a claim to the lender for the unpaid principal balance of a defaulted mortgage.

Loans must meet certain requirements established by FHA to qualify for insurance.

How is FHA funded?

FHA is the only government agency that operates from its self-generated income. The Mortgage insurance premiums it collects from borrowers via lenders are used to operate the program. FHA provides a huge economic stimulation to the country in the form of home and community development, which trickles down to local communities in the form of jobs, building suppliers, tax bases, schools, and other forms of revenue.

The History of FHA 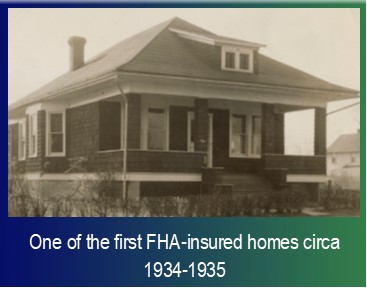 Congress created the Federal Housing Administration (FHA) in 1934. The FHA became a part of the Department of Housing and Urban Development's (HUD) Office of Housing in 1965.

When the FHA was created, the housing industry was flat on its back: 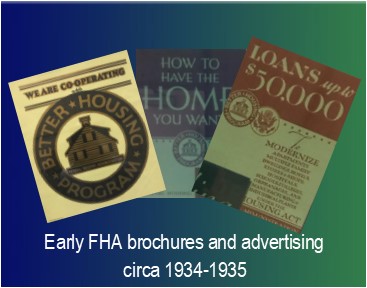 During the 1940s, FHA programs helped finance military housing and homes for returning veterans and their families after the war.

In the 1950s, 1960s and 1970s, the FHA helped to spark the production of millions of units of privately-owned apartments for elderly, handicapped and lower income Americans. When soaring inflation and energy costs threatened the survival of thousands of private apartment buildings in the 1970s, FHA's emergency financing kept cash-strapped properties afloat.

The FHA moved in to steady falling home prices and made it possible for potential homebuyers to get the financing they needed when recession prompted private mortgage insurers to pull out of oil producing states in the 1980s.

By 2001, the nation's homeownership rate had soared to an all time high of 68.1 percent as of the third quarter that year.

During the â€śGreat Recessionâ€ť of 2008-2013, FHA played an important countercyclical role, propping up the housing market to supply access to mortgage credit when other sources of financing were limited and the capital markets had seized up.