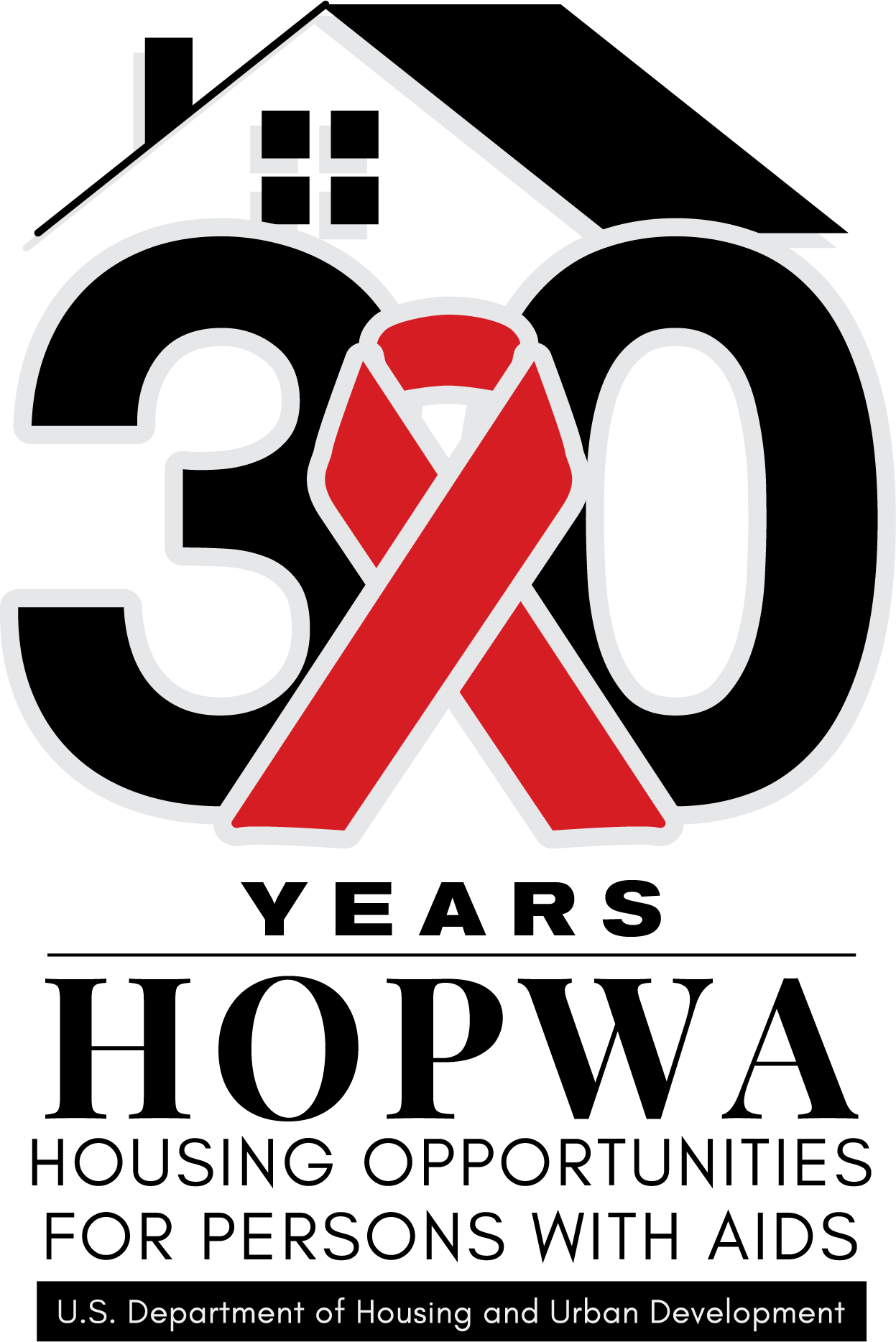 The HOPWA program was established to provide communities with resources and incentives for devising long-term strategies to develop a range of housing assistance and supportive services for low-income people living with HIV and their families to overcome key barriers to stable housing such as affordability and discrimination. In recognition of HOPWA’s 30th year, we will be highlighting HOPWA programs and the work they are doing in their communities throughout the year.

Timeline: A look back at 30 years of HOPWA

1986 – May 1: The International Committee on the Taxonomy of Viruses announces that the virus that causes AIDS will officially be known as “Human Immunodeficiency Virus” (HIV).

Fun Fact:  The first map for FY1992 HOPWA formula jurisdictions and awards was hand drawn by David Vos who would later become the Director for the HOPWA program. 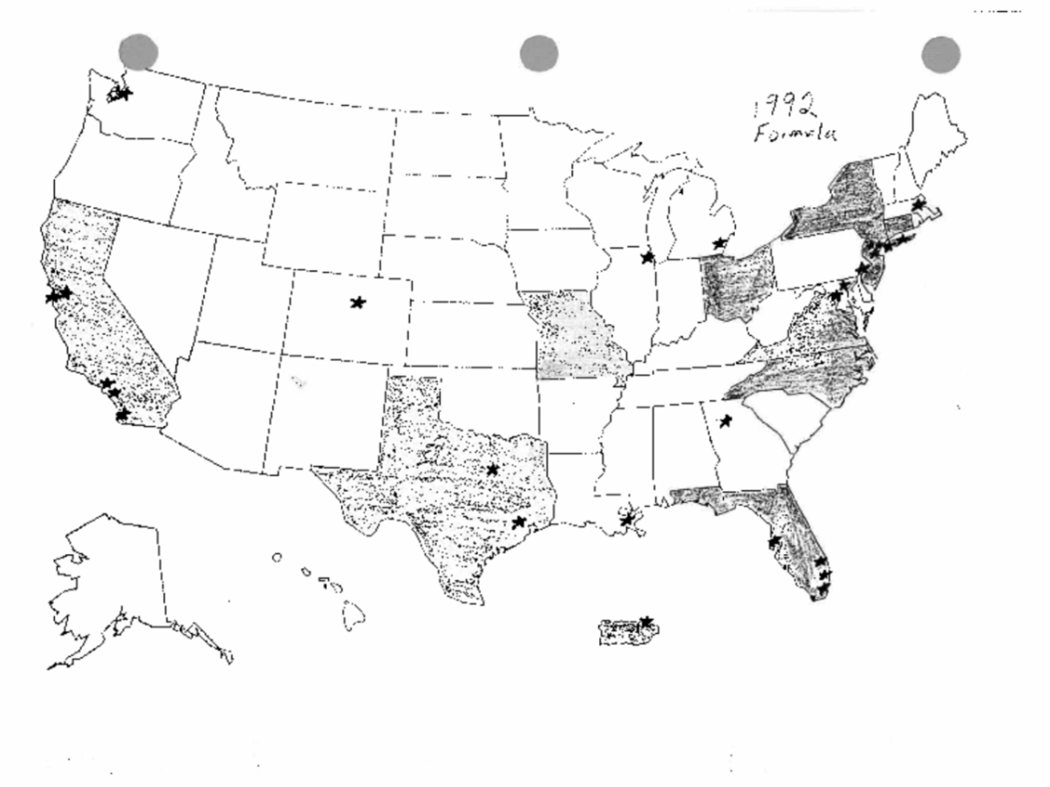 1994 – The Office of HIV/AIDS Housing which administers the HOPWA program was established. The mission of the office is to ensure that each of the programs and initiatives of HUD is responsive to the needs of persons living with HIV/AIDS.  The primary function of the office is to take every possible step to guarantee the Departmental programs and policies support the housing and specialized service needs of persons living with HIV/AIDS and their families.

1997 – Highly active antiretroviral therapy (HAART) becomes the new standard of HIV care.  The U.S. Centers for Disease Control and Prevention (CDC) report the first substantial decline in AIDS deaths in the United States. Due largely to the use of HAART, AIDS-related deaths in the U.S. decline by 47% compared with the previous year.

2003 – April 25: HUD published a Notice of Funding Availability (NOFA) to solicit applications for a Federal collaboration with CDC to study the connection of housing and HIV. The study was the first-of-its-kind linking housing to positive health outcomes for people with HIV and established the HOPWA program as an evidence-based and cost-effective platform for improving the health outcomes of persons living with HIV/AIDS and their families. The NOFA resulted in an 18-month study that followed 630 HIV positive participants in three cities – Baltimore, Chicago and Los Angeles, and several peer-reviewed publications with the findings from the study. https://archives.hud.gov/funding/2003/grphopwa.cfm

2007 – June 2: A peer-reviewed publication from the HUD/CDC Housing and HIV initiative demonstrated that HOPWA housing assistance serves as an efficient and effective platform for improving the health outcomes of persons living with HIV/AIDS and their families.  Citation: Kidder, D.P., Wolitski, R.J., Royal, S. et al. Access to Housing as a Structural Intervention for Homeless and Unstably Housed People Living with HIV: Rationale, Methods, and Implementation of the Housing and Health Study. AIDS Behav 11 (Suppl 2), 149–161 (2007). https://doi.org/10.1007/s10461-007-9249-0

2009 – December 1: A peer-reviewed publication from the HUD/CDC Housing and HIV initiative found that housing was associated with 41 percent fewer visits to emergency departments, a 23 percent reduction in detectable viral loads, a 10 percent reduction in perceived stress, and a 19 percent reduction in unprotected sex with partners whose HIV status was negative or unknown. Citation: Wolitski, R.J., Kidder, D.P., Pals, S.L. et al. Randomized Trial of the Effects of Housing Assistance on the Health and Risk Behaviors of Homeless and Unstably Housed People Living with HIV. AIDS Behav 14, 493–503 (2010). https://doi.org/10.1007/s10461-009-9643-x

2011 – September 21: HUD awarded nearly $9 million in HOPWA competitive grant funding to seven Integrated HIV/AIDS Housing Plan (IHHP) grantees in communities across the country. The IHHP grantees were funded to provide housing assistance and supportive services to low-income persons living with HIV/AIDS (PLWHA) and their families. The HOPWA IHHP initiative was developed in response to the National HIV/AIDS Strategy‘s call for enhanced collaboration at all levels to achieve its goals. The IHHP grantees worked to accomplish the goals of the National HIV/AIDS Strategy through improved community planning, resource utilization, and service integration, including actions to increase collaborative efforts with health care systems, Homeless Continuums of Care, affordable housing programs, employment programs, and other mainstream non-HOPWA resources. The seven projects were funded to become replicable models of improved coordination of housing and care for PLWHA. https://www.hudexchange.info/programs/hopwa/2011-ihhp-spns-program-grantees/#justice-resource-institute

2012 – October 28: HOPWA recognizes its 20th year anniversary of the program being funding. https://www.hudexchange.info/resource/2037/hopwa-20-housing-innovations-in-hiv-care/

2014 – October: The Office of HIV/AIDS Housing partnered with Department of Labor to release “Getting to Work: A Training Curriculum for HIV/AIDS Service Providers and Housing Providers”.  The release of the employment curriculum showed the progressing shift in the HIV epidemic.  People living with HIV are able to live healthy and productive lives with the help of medication, finally making work a possibility for many persons living with HIV.  https://www.hudexchange.info/training-events/dol-hud-getting-to-work-curriculum-for-hiv-aids-providers

2015 – July 30: The White House launches the National HIV/AIDS Strategy: Updated to 2020. The updated Strategy retains the vision and goals of the original, but reflects scientific advances, transformations in healthcare access as a result of the Affordable Care Act, and a renewed emphasis on key populations, geographic areas, and practices necessary to end the domestic HIV epidemic. https://files.hiv.gov/s3fs-public/nhas-update.pdf

2016 – June 14: In conjunction with the U.S. Department of Justice (DOJ) Office on Violence Against Women (OVW), HUD awarded joint funding to eight demonstration projects across the U.S. to provide housing assistance and supportive services to low-income persons living with HIV/AIDS who were homeless or in need of housing assistance due to Intimate Partner Violence (IPV). https://www.hudexchange.info/programs/hopwa/vawa-hopwa-demonstration/

2016 – September 21: HUD published a final rule in the Federal Register entitled "Equal Access in Accordance with an Individual's Gender Identity in Community Planning and Development Programs." Through this final rule, HUD ensures equal access to individuals in accordance with their gender identity in programs and shelter funded under programs administered by HUD's Office of Community Planning and Development (CPD). This rule buildt upon HUD's February 2012 final rule entitled "Equal Access to Housing in HUD Programs Regardless of Sexual Orientation or Gender Identity". https://www.hudexchange.info/resource/1991/equal-access-to-housing-final-rule/

2019 – February 5: In the State of the Union address, the President announced the administration’s goal to end the HIV epidemic in the United States in 10 years. The initiative seeks to reduce the number of new HIV infections in the United States by 75 percent by 2025, and then by at least 90 percent by 2030, for an estimated 250,000 total HIV infections averted. https://www.hiv.gov/federal-response/ending-the-hiv-epidemic/overview

2020 – March 27: The Coronavirus Aid, Relief, and Economic Security (CARES) Act provided supplemental HOPWA grant funds for both formula and competitive grantees to maintain operations and for rental assistance, supportive services, and other necessary actions, in order to prevent, prepare for, and respond to coronavirus. https://www.hudexchange.info/programs/hopwa/covid-19/

2020 – November 27: The HOPWA Resource Tool became available to assist Ending the HIV Epidemic (EHE) Phase 1 jurisdictions and stakeholders in evaluating and planning for housing needs for people with HIV. The development of HOPWA Resource Tool was a collaborative effort between HUD’s Office of HIV/AIDS Housing and the Department of Health and Human Services’ (DHHS) Office of Infectious Disease and HIV/AIDS Policy (OIDP).  The HOPWA Resource Tool, through the AHEAD Dashboard provides grantee performance data, formula modernization projections, competitive funding estimates, and grantee contact information in a spreadsheet, allowing EHE Phase 1 jurisdictions and HUD partners to more easily identify where HOPWA and EHE resources intersect. https://www.hiv.gov/blog/hopwa-resource-tool-helps-jurisdictions-plan-and-evaluate-housing-needs

2021 – April 22: HUD Secretary Marcia L. Fudge announced that HUD is withdrawing the proposed rule that would have weakened the Equal Access Rule and reaffirming HUD’s commitment to the 2016 Equal Access Rule. The Equal Access Rule ensures that all individuals – regardless of sexual orientation or gender identity - have equal access to the Department’s Office of Community Planning and Development programs, shelters, other buildings and facilities, benefits, services, and accommodations. HUD submitted its action withdrawing that rule to the Federal Registry. https://www.hud.gov/sites/dfiles/CPD/documents/HOPWA-In-Focus-Equal-Access-Rule-5-4-2021.pdf

2021 – April 27: The Office of HIV/AIDS Housing worked closely with the HUD Office of Fair Housing and Equal Opportunity (FHEO) to produce a poster to address housing discrimination because of HIV. The poster states that housing discrimination because of HIV is illegal, and was released as part of Fair Housing Month. https://www.hud.gov/sites/dfiles/CPD/documents/Fair-Housing-Month-HIV%20Discrimination-Poster-Available-4-27-2021.pdf

2021 – June 5: The world marks 40 years since the first five cases of what later became known as AIDS were officially reported. https://www.hud.gov/sites/dfiles/CPD/documents/HOPWA-In-Focus-40-Years-with%20HIV_6-3-2021.pdf

2021 – December 1: HUD announced grant awards totaling $41 million in HOPWA competitive grants to 20 local governments and non-profit organizations through the HOPWA: Housing as an Intervention to Fight AIDS (HIFA) funding opportunity. The funding provides housing assistance and supportive services for low-income persons living with HIV and their families, coordination and planning activities, and grants management and administration. Selected communities will implement new projects that elevate housing as an effective structural intervention and align with initiatives aimed at ending the HIV/AIDS epidemic. HUD awarded projects with exemplary and innovative qualities, including community-level coordination, data collection with emphasis on stable housing and positive health outcomes, culturally competent approaches to providing housing and services, and a systemic approach to advance equity in underserved communities that can serve as a national place-based model. https://www.hud.gov/press/press_releases_media_advisories/HUD_No_21_196

2021 – December 1: The National HIV/AIDS Strategy (2022–2025) was released. The NHAS 2022-2025 provides stakeholders across the nation with a roadmap to accelerate efforts to end the HIV epidemic in the United States by 2030. The Strategy reflects President Biden’s commitment to re-energize and strengthen a whole-of-society response to the epidemic while supporting people with HIV and reducing HIV-associated morbidity and mortality. The White House’s Office of National AIDS Policy (ONAP), part of the Domestic Policy Council, facilitated development of and published the Strategy, which builds on the 2021 HIV National Strategic Plan and the two prior National HIV/AIDS Strategies (2010, 2015). https://www.hiv.gov/federal-response/national-hiv-aids-strategy/national-hiv-aids-strategy-2022-2025

2022 – August 26:  The Federal Implementation plan for the National HIV/AIDS Strategy was released and HUD commits take a number of actions to support the four goals identified in the Strategy. https://www.hud.gov/sites/dfiles/CPD/documents/HOPWA-Newsletter-Implementation-Plan-for-NHAS-2022-08-29.pdf

2022 – October 1: The five-year phase-in of the revised HOPWA formula calculation authorized under HOTMA was completed. Fiscal Year 2022 was the first year of full implementation of the HOPWA formula modernization.