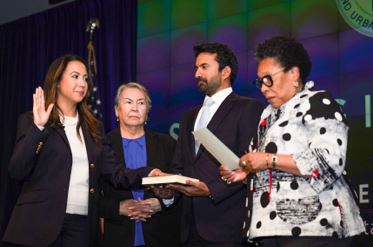 WASHINGTON - On Thursday, Elizabeth de León Bhargava was sworn in as the U.S. Department of Housing and Urban Development’s (HUD) Assistant Secretary for Administration.

“I’m pleased to swear in Elizabeth de León Bhargava as HUD’s Assistant Secretary for Administration,” said Secretary Fudge. “Elizabeth is an exceptional public servant with a distinguished track record of growing diverse, inclusive, and talented workforces in the public sector. Her leadership and expertise will be invaluable as we continue to strengthen HUD’s internal capacity and efficiency to meet the housing needs of America’s families and communities.”

“I’m honored to serve in the Biden-Harris Administration as HUD’s Assistant Secretary for Administration and for the opportunity to ensure that our communities have the strong foundation of dedicated public servants advocating for their equitable access to thrive,” said Assistant Secretary Bhargava. “HUD’s Office of Administration plays a vital role in the department’s work, and I'm pleased to join such a talented staff in strengthening and enabling HUD’s workforce. I look forward to joining Secretary Fudge and HUD in delivering our mission to create strong, sustainable, inclusive communities and quality affordable homes for all.”

HUD's mission is to create strong, sustainable, inclusive communities and quality affordable homes for all.
More information about HUD and its programs is available at www.hud.gov and https://espanol.hud.gov.