â€śThe Call HUD: Because Sexual Harassment in Housing is Illegalâ€ť campaign will increase the Departmentâ€™s efforts to educate the public about what behaviors constitute sexual harassment and what to do and who to contact if they experience it where they live. Additionally, the initiative will offer sexual harassment training to employees of public housing authorities and other housing providers. 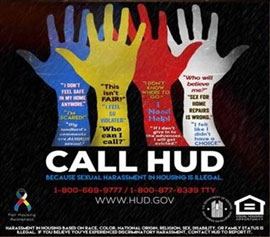 April is Fair Housing Month, a time when we celebrate the Fair Housing Act and recommit ourselves to ensuring every American has access to housing that is free from discrimination. The Fair Housing Act makes it unlawful to discriminate in housing transactions based on race, color, national origin, religion, sex, disability, or family status. This year, HUD is especially focused on protecting the right of individuals to feel safe and secure in their homes, free from sexual harassment or unwanted sexual advances.

â€śComplaints we receive and cases we see tell us that there are some housing providers who unfortunately prey on vulnerable men and women,â€ť said Anna MarĂ­a FarĂ­as, HUDâ€™s Assistant Secretary for Fair Housing and Equal Opportunity. â€śNo one should have to tolerate harassment or unwanted sexual advances in order to keep a roof over their head, and HUD will continue to take appropriate action when discrimination of this type occurs.â€ť

HUD's Office of Fair Housing and Equal Opportunity (FHEO) will introduce the â€śCall HUDâ€ť campaign during the Department's Fair Housing Month opening program, which will take place at HUD headquarters, 451 7th Street, SW, Washington, DC, from 2 p.m. to 3 p.m., Thursday, April 4, inside the Brooke-Mondale Auditorium. During the program, two survivors of sexual harassment will share their stories about how they called HUD and got help. In addition, the program will highlight ABC Nightlineâ€™s recent story: Uncovering Rampant Sexual Harassment in Housing Systems, which features women who share their stories of abuse and the impact the experience had on their lives, as well as how HUD and the U.S. Department of Justice (DOJ) helped them to obtain the justice they deserved, and in one case, a $2.7 million settlement.

In April 2018, HUD and DOJ launched a nationwide joint initiative that combats sexual harassment in housing by increasing the publicâ€™s awareness of the issue and encouraging the reporting of harassment.

This year, throughout the month of April, the â€śHumans of HUDâ€ť photoblog will feature victims of sexual harassment in housing, highlighting the personal testimonies of survivors and those who helped them.

HUD will end the month with a closing ceremony on April 29 that will include a Fireside Chat between HUD and DOJ representatives involved with the initiative. The event will also include the signing of a Memorandum of Understanding, which establishes, among other things, sexual harassment training sessions for housing providers.

HUD's mission is to create strong, sustainable, inclusive communities and quality affordable homes for all.
More information about HUD and its programs is available on the Internet
at www.hud.gov and https://espanol.hud.gov.